How to block unwanted calls and texts on your android

Everyday you get so many unwanted and
annoying calls. Must be irritating, right? What if i cone
up with ways you could stop and get rid of those? Oh
yes, a bliss it would be. So here are ways you could
proceed with doing them the right way :
Manual Blocking :
Blocking calls manually is different in different phones,
hence going into details and explaining that is not
possible. Its easy though, and anybody who is well
versed with android phones can easily do it.
Apps to Block Unwanted Calls :
1- Mr.Number :- An amazing app this is to block
unwanted calls and messages, on any possible android
device. Additionally, this also has a feature to find
unknown numbers from the US. Some basic features of
this are :
Block Calls and SMS from specific person and
particular Area.
It helps you get rid of calls from telemarketers,
by just blocking their numbers.
Reverse look number feature.
Report spams to other users as well.

2- Call Blocker – This is another android app that helps
you block unwanted calls. Its available as a paid version
as well. The paid version helps you acquire additional
benefits. It has features that include :
Block Unwanted Calls and send auto Reply.
Protect your messaged and call registers.
Get a back up of your contacts to the server so
that you dont lose them later.

3- Call Control – It is a global app used by 5 million
users for blocking calls and messages. The cell phone is
going to ring, to your own personal choice. Hence, this
could be the smartest choice for blocking texts and
calls. The list includes:
1. Block spam callers automatically.
2. Blocking calls from a particular are, using Area
code.
3. Block text and picture messages.
So now that you are aware of ways to block calls and
spams, go ahead an shove those unwanted calls out of
your phone.

4. Kaspersky antivirus: This has a wonderful feature of call and text message filtering 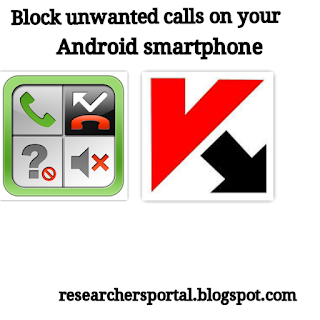