Android rooting ……….about, merits and demerits.

160
SHARES
2k
VIEWS
Share on FacebookShare on Twitter
Introduction:
Android is an operating system for mobile phones based on the Linux kernel which is currently developed by Google.  It is the most popular mobile operating system now because of it’s user friendly interface. It is also relatively cheaper than other mobile operating systems like blackberry and windows OS. It also enables easy application development and this accounts for billions of applications and games developed since its conception in 2003.
Android Rooting
Android, which is based on Linux was designed to restrict users access to some parts of Linux by carriers or manufacturers for commercial concerns and also safety reasons. Rooting is done on an android device to give access to administrative permissions and to overcome those limitations and restrictions. It modifies the process on the original system and gives the user the ability to replace system applications and settings, run specialized apps and also remove the OS and replace it with a custom one.
Advantages
Rooting as have been mentioned earlier, grants permissions to users and applications to attain maximum utilization and functioning of the phone and softwares respectively. Below are the rundown of the benefits of rooting;
1. Custom ROMs: Custom ROMs can be used to replace the original ROM of a rooted phone to change its entire look. It can also speed up the processing speed of the device. There are thousands of custom ROMs online available for download.
2. Automated processes: Certain processes can be automated using special apps that only work perfectly on rooted devices such as the Tasker app. The processes that can be automated includes power screen on and off, cpu speed control, GPS toggling, etc.
3. Uninstall/change anything: System apps can be uninstalled only on rooted android phones. Also, certain changes like IMEI change can only be done perfectly on rooted android phones.
Others include; preventing and stopping ads on applications, tweaking the dark corners of your device,  remove preinstalled crapware and extension of battery life.
Disadvantages:
1. Your phone warranty turns void.
2. You can turn your smartphone into a brick.
3. Malware can easily breach your mobile security: Trojans, worms, spyware and viruses can easily enter and infect your rooted android phone if it is not protected by an effective mobile antivirus.
Conclusion:
Rooting your android device is a matter of choice,  but I just want you to remember the following tips:
1. If you want to root your device, research the processes peculiar to your device brand because it depends on the phone model to avoid damaging your device.
2. If you change your mind after rooting your device, you can still unroot it using some apps like SuperUser,etc.
3. Check if rooting is legal in your country or region before rooting to avoid getting into trouble.
Regards! …… 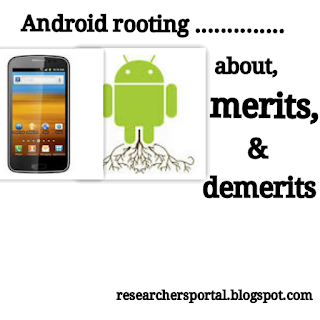 Removable and Non-Removable Batteries: Advantages and Disadvantages of each, and which one to choose

Easy way for android IMEI tweaking: All you need to know

How to make free calls on your android, ios, blackberry and pc

How To Change The IP Address Of Your Android Smartphone