How To Know Who Tried To Unlock Your Android Smartphone

157
SHARES
2k
VIEWS
Share on FacebookShare on Twitter
Introduction:
Ever wanted to know who tried to unlock your phone while you were away? Sometimes, we don’t just want someone to have access to our phone. Hurray!!!!!, you can now know anybody that tries to unlock your phone using the HiddenEye app. 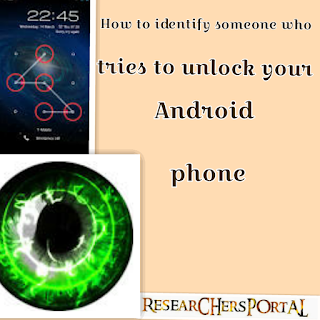 Hidden Eye is a simple app with no frills that will photograph the person when they try to unlock your phone. You can set it to play your ringtone when a user tries to unlock your phone without your knowledge.
In the free version of Hidden Eye the alarm is simply your
ringtone; the inability to answer the call may lead some to
continue on to the fact something funny is going on, of course,
and it won’t sound at all if your handset is in silent mode.
You’ll need to install the paid-for version to select a siren or
other warning sound of your choice.
Upon correctly unlocking the handset, Hidden Eye presents a
series of time- and date-stamped mugshots of all those who
have attempted to break in. You can have a giggle at their
expense, or plan a more suitable punishment. It stores these
shots until you open the app and clear its cache.
A ‘Plus’ version of Hidden Eye,adds extra functionality. There’s a new ad-
free user interface with a holo theme, from which you can set
your own alarm sounds and delete individual images, but it’s
of little importance given that you rarely need to enter the
app. More usefully, if your smartphone has been stolen or
misplaced, Hidden Eye can reveal its location on a map and
send you photographic evidence of the thief or finder via email
or Dropbox.
How to use.
1.Enable screen security lock on your phone.
2. Install and launch the app “HiddenEye”
3. Set the Security Status to ON.
4. Activate the device admin for Hidden Eye and that’s it. You are now ready for the action.
HOW TO UNINSTALL
1. Set the Security Status to “OFF”
2. Uninstall the app now.
Download HiddenEye here
Share63Tweet39Share16